skip to main | skip to sidebar

Rel1k recently posted his thoughts on how DerbyCon, and I thought I would share my own. I have not exactly made a secret of how I felt about DerbyCon. The speaker lineup was simply amazing. There were very few spots where I didn't have a talk I wanted to see. I unfortunately had to make some hard decisions between talks that were going at the same time.

When I go to conferences, I often find myself wandering aimlessly for periods. I'm not interested in the talks that are on at that time, and I don't really have anyone to talk to. So I wander about until I find someone I know. Every time I started to wander at Derbycon, I would run into someone who wanted to talk about something. I had no real "down time" the entire conference.

I spent time hanging out with, or at least talking to, people who have been something of heroes to me. I have followed some of these people for years, and getting to talk to them was great. What was even more amazing was that many of them knew who I was! Shaking hands with Chris Gates for the first time was surreal for me. I have followed Chris since I started in security. I tracked dookie2000ca down and finally got him to sign my copy of  Metasploit: A Penetration Tester's Guide.I got to spend time hanging out with jduck, corlanc0der, and sinn3r.  Everywhere I went, I felt not jsut like an equal, but like we were all friends. The most telling thing about the Information Security community is that we call it the Community, not the Industry. DerbyCon embodied this spirit. The entire weekend felt more like a family reunion than a conference, and I was sad to leave. 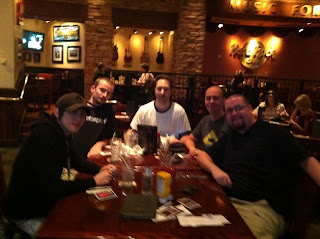 I was privileged to get to take the CoreLan Exploit Dev bootcamp. This training class was intense. We went from 1600-0200 both days, and didn't make it through everything. Peter Van Eeckhoutte (corelanc0d3r), took a class of 30 people from different backgrounds and walked them through windows exploitation. Some people in the class had absolutely no experience in exploitation. Despite this, Peter kept the entire class moving along, and as far as I could tell, nobody was lost. It was a shame that I had to miss parts of the conference for this training, but I would make the same choice again.

Brandon Perry and I wandered into the CTF room out of curiosity at one point. I had no plans to enter the cTF, so I hadn't really brought any tools with me. We decided to start playing around, not to seriously compete, but to have fun. We shared things we found with each other, and were just having a good time. Before we knew it, we were on top of the leaderboard. The organizers came and asked us to either be scored as a team, or to stop working together. I closed my account out and we kept working together under Brandon's. I was tied up with training for most of the conference, so Brandon spent a lot more time on the CTF than I did. In the end, we ended up in 5th place. I think if we had gone in prepared from the start, and I had the time to focus on it, we could have won. See Brandon's writeup on the CTF efforts here.

A few weeks before Derbycon, I started trying to put together a #metasploit meetup. I wanted to get everyone from the metasploit IRC channel together to hang out for a bit, have some drinks and just have fun. Mubix came up with the idea of throwing a birthday party for ms08-067, so the two ideas merged naturally. Mubix got it all organized and pulled off a great event. There was a big cake  and we all sang happy birthday. Then HD started handing out Redbull and Vodkas to EVERYONE at the party! 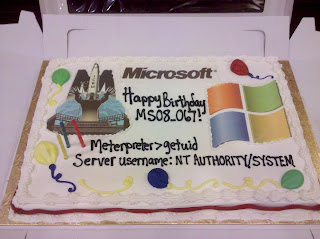 So I have ranted for long enough, I guess. The summary is this: Derbycon was probably one of the best experiences I have had. I felt at home the entire time I was there. The entire weekend made me more certain than ever that I am where I belong doing what I am meant to do. I can't possibly thank everybody enough, but thank you conference organizers, Rel1k, HD, Jduck, Corelanc0der, sinn3r, nullthreat, lincoln, bperry, Red, and everyone else I hung out with this weekend.
Posted by thelightcosine at 08:09

Email ThisBlogThis!Share to TwitterShare to FacebookShare to Pinterest
Labels: derbycon